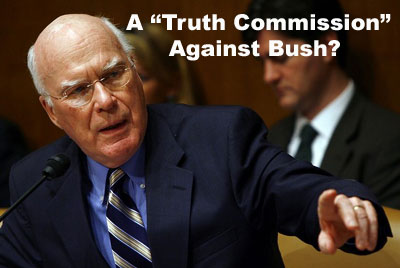 The concept of the “truth commission” originated in post-apartheid South Africa, when the Mandela government launched an investigation into crimes against humanity. Punishments were waived on the grounds that the nation needed to know the truth about the white minority regime’s suppression of black Africans. Presumably, Leahy assumes President Bush engaged in equally egregious behavior during the War on Terror. Leahy, like his Michigan colleague Carl Levin, hopes to distort any circumstantial evidence he uncovers about how Bush-44 successfully kept this nation free from a second terrorist attack for seven years into proof of the greatest violation of civil rights since Lincoln suspended habeas corpus.

If the investigation exposes the ongoing, covert measures Bush has taken to keep America safe, Leahy will only smile as they are revealed. He has a long history of exposing the most vital secrets of our nation. At least one operative was murdered after Leahy publicly leaked a 1985 intercept that had enabled the capture of the Achille Lauro terrorists. After Leahy leaked a 1986 covert operation to topple Libyan dictator Moammar Gaddhafi, it was necessarily canceled. But for that, in other words, 270 victims of Libya’s Pan Am 103 bombing over Lockerbie Scotland might still be alive.

Finally in January 1987, Leahy was forced to resign as vice-chair of the Senate’s Select Committee on Intelligence after leaking classified information on the Iran-Contra affair. Not surprisingly, after 9/11, the FBI investigated national security leaks from Congress, specifically House and Senate Select Intelligence committee leaks.

In the 14 years after resigning from the intelligence committee in disgrace, the Vermont Senator also thwarted key speech and public education. In July 1999, then Defense Secretary William Cohen in a Washington Post op-ed predicted a major terrorist attack on U.S. soil. He and Secretary of State Madeleine Albright were so convinced Osama bin Laden would hit the U.S. that they canceled a planned visit to Albania that month. Yet in 2000, for fear of an unspecified threat against “civil liberties,” Leahy successfully opposed publication of a 2000 National Commission on Terrorism report in intelligence legislation—another measure that could have saved lives.

Had terrorists ended up in the U.S. courts, many benches would be empty thanks to Leahy. Through January 2001, he chaired the Senate Judiciary Committee. He grew petulant, however, when New Hampshire Sen. Judd Gregg replaced Leahy—and Bush appointed John Ashcroft as Attorney General over his intense objections. (Mind, many early Ashcroft opponents ended up heralding him as a hero for defending the U.S. Constitution far better than they’d expected.) In June 2001 Leahy returned as Senate Judiciary chair for 18 months. He then worked overtime to halt and block Bush judicial nominations. As ranking committee member from January 2003 through December 2006, he likewise plotted to thwart every Bush judicial nominee, an allegation he tried to turn against Republicans who attempted to expose him. In January 2007, upon resuming the Judiciary chairmanship, Leahy reinforced his stalwart political blockade, which he maintained throughout the 110th Congress. Political shenanigans over judicial nominees grew so pronounced that even the Washington Post objected to what it called intentional “justice delayed.”

The scales of justice are highly imbalanced in Leahy’s world. Pat defended Illinois Senator Richard Durbin when he compared U.S. troops in Guantanamo Bay to Nazis on the Senate floor. Leahy quickly appeared on Vermont’s Charlie & Ernie talk radio show. Although the Wall Street Journal directly quoted the U.S. Congressional Record, Leahy whined WSJ reporters “are notorious for taking quotes totally out of context, even making them up.”

Now, Leahy wants to convince the public that his “Truth Commission” is merely a good faith attempt to “get to the bottom of things.”

Were he interested in investigations that may have some political impact, he could turn his attention to potential conflicts of interest in the Obama administration. Although Obama signed an executive order barring lobbyists from serving in his administration, he also signed 17 lobbyist waivers including Attorney General Eric Holder (until 2004, a registered lobbyist for clients like bankrupt Global Crossing), White House intergovernmental affairs director Cecilia Munoz (through 2008, an anti-immigration enforcement advocate for National Council of La Raza) and Deputy Defense secretary nominee William Lynn (until 2008, a Raytheon defense contractor executive and registered lobbyist).

Leahy could investigate campaign donations Obama received from disgraced former Federal National Mortgage Association (Fannie Mae) chairman Franklin D. Raines and his supporters, which total more than $100,000. Obama gave his blessings and state and federal legislative help to several developers who subsequently received more than $700 million in subsidies and loans for their projects. The developers, including Obama’s Chicago law partner Allison Davis, Syrian developer Antoin “Tony” Rezko (now incarcerated on 16 political corruption charges) and Chicago slumlord Cecil Butler, among others, all profited greatly from loans to unqualified borrowers—largely at U.S. taxpayer expense. These may have only the appearance of impropriety — but had they occurred in the Bush administration, Leahy would have long since started mining the “truth.”

Leahy’s blatant partisan witch-hunt is the most recent sign that Bush Derangement Syndrome remains alive and well. Whatever the left’s talk of “hope and change,” of abandoning the “politics of fear,” its bomb-throwers simply wish to continue fighting yesterday’s battles, because their hatred will not allow them to, err, Move On.