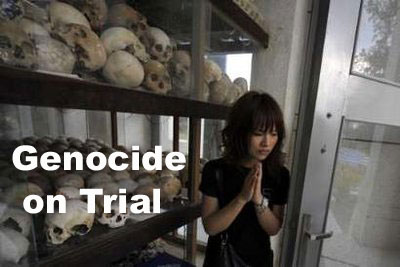 “I have waited 30 years for this trial,” said painter Vann Nath, 63, on the eve of Feb. 17 pre-trial proceedings in Phnom Penh’s international Extraordinary Chambers in the Courts of Cambodia (ECCC). So have an estimated 3 million other survivors of Pol Pot’s five-year Cambodian reign of terror.

On April 17, 1975—“Year Zero,” as the communist tyrant named that date—Pol Pot’s communist forces began driving people from Cambodian cities with the fanatical goal of recreating a perfect, clean, peasant-controlled, communist agrarian society. The cadres of “brother number one,” as Pol Pot was known, starved, beat and murdered up to 2 million Cambodians, more than a fifth of the population in 1975. With backing from China, Pol Pot destroyed virtually all Cambodia’s doctors, attorneys, intellectuals, artists and musicians in the nation’s rural areas, which quickly became killing fields. Even today, Cambodia’s countryside is littered with human bones and indiscriminately placed land mines.

Bringing the perpetrators of Cambodia’s genocide to justice has been a story almost as sad as the horrific atrocities themselves. Vietnamese communist forces liberated Cambodia over 30 years ago, in January 1979. However, Chinese-backed Khmer Rouge forces remained at large in Cambodia’s jungles until well after Vietnamese rule ended in 1991. Cambodia at long last achieved independence and self-rule in 1993, but Khmer renegades controlled some rural areas until March 1998, when the final Khmer cadres surrendered.

Meanwhile, there were virtually no efforts to obtain justice, apart from the absurd July 1997 show trial Pol Pot received from his comrades in Anlong Veng, and his sentence of house arrest for life. Pol Pot remained under house arrest he died in 1998. His military leader, Ta Mok, likewise died in July 2006, without ever facing justice.

These “punishments” reflected the enormous conflict of interest of Cambodia’s government. While self-ruled since 1993, the young polity actually had counter-incentives against seeking genocide trials. Co-Prime Minister Hun Sen, himself a former Khmer official, had served Vietnam’s People’s Republic of Kampuchea as a foreign minister from 1979 through 1990. Even in the relative calm of 1993 to 1998, when Hun shared the Prime Minister’s post with Cambodian Prince Norodom Ranariddh, the government rebuffed a 1994 coup, regional upheaval and pockets of Khmer Rouge unrest. Hun feared indictments against many of his regime’s other former Khmer appartchiks. Moreover, he feared public scrutiny and backlash over his continued close ties with Chinese leaders, who actively backed the Khmer Rouge, from 1975 until Vietnamese rule ended in 1991. “I do not understand why some people want to remove Pol Pot,” Chinese vice premier Deng Xiaoping said in 1984. “It is true that he made some mistakes in the past but now he is leading the fight against the Vietnamese aggressors.”

In June 1997, 18 years after the Khmer reign of terror, Hun and Prince Norodom pretended to request genocide trials, asking the U.N. General Assembly to establish a tribunal like those for the Rwanda and former Yugoslavia genocides. But Cambodian conflicts of interest remained. Thus, on ascending as sole Prime Minister—following the final Khmer rebels’ surrender—Hun granted criminal immunity to Noun Chea, Pol Pot’s “brother number two,” and advised Cambodians to “dig a hole and bury the past” to reconcile. In 1999, Hun rejected the U.N. proposal to seat international judges on Cambodia’s genocide tribunal.

Cambodian delays and U.N. Secretary General grandstanding prevented the General Assembly from reaching any agreement until March 2003. Only in 2007 did Hun Sen accept participation by foreign justices on the “hybrid” ECCC.

Still, years of wrangling seemed to remain. “This just goes on and on and I’ve almost lost hope there’ll ever be justice,” Vann Nath said in February 2007, a decade after the Cambodian government asked the U.N. to help convene a tribunal. Indeed, three other survivors of Phnom Penh’s most notorious prison since then literally died waiting for justice.

Yet, Hun continued to delay and let corruption run amok. From 2007 to early 2009, agencies including the U.N. Development Programme (UNDP), European Commission and U.N. Office of Internal Oversight Services (UNOIOS), alleged that Cambodian officials had demanded kick backs from local justices and court staff appointed to the ECCC. Deputy prime minister (and Khmer Rouge trials Task Force chair) Sok An repeatedly promised to investigate—but did nothing. In mid-2008, “payroll embezzlement” charges lead the UNOIOS to freeze Cambodia’s portion of ECCC funding. He so abused the U.N. human rights envoy, that Yash Ghai last year quit. There were also the cost overruns endemic to such international tribunals. Originally estimated at $19 million, the ECCC budget is now expected to exceed $170 million, reports the Economist, similar to astronomical increases in 2003 Sierra Leone court mandate and the former Yugoslavia and Rwanda tribunals, which together consumed over $2 billion.

But worst of all is the lack of justice. In 2007, officials finally arrested Khmer Rouge ideological chief Nuon Chea, 82; former head of state Khieu Samphan, 76; former foreign minister Ieng Sary, 82; and fellow Central Committee member and Ieng’s wife, Thirith, 75. In 1999, the government also arrested Toul Sleng prison chief Kaing Guek Eav, 66, a former math teacher known as Duch (pronounced doik), who ordered the deaths of more than 14,000 prisoners in the Phnom Penh high school turned slaughter house. Now an avowed Christian, Duch admitted committing atrocities on his arrest, but claims he would have been murdered himself had he not followed orders.

Duch will be tried first. After waiting three decades to be heard about the catastrophic crimes they witnessed, only four of Duch’s victims remain alive, among them painter Vann Nath, 63; Chum Mey, 77; and sole child survivor Norng Chan Phal, now 38.They watched the February 2009 ECCC pre-trial proceedings with anxious relief. “I could not sleep last night. I was waiting for sunrise so I could see Duch in the dock,” Vann said.

But it remains to be seen whether the other Khmer Rouge masterminds, old and ailing, will survive long enough to go to trial, which will not be scheduled until 2010, if ever. In sum, the international community has disappointed Cambodia as much as its own government. The “limited scope and poor design” of the international and Cambodian “hybrid” ECCC will call few surviving Democratic Kampuchea (DK) perpetrators “to account for their crimes,” sadly concludes Cambodian scholar Sopheada Phy. Once again, Khmer Rouge planners, supporters and participants may get away with mass murder.