Should the U.S. nationalize banks? 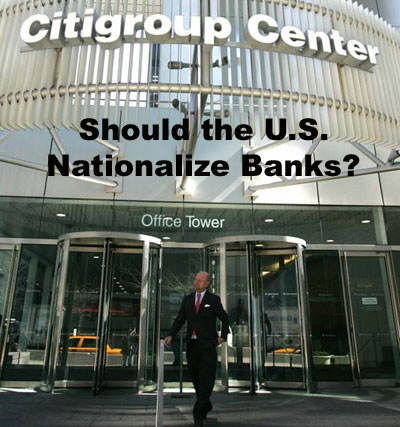 There may be a simpler solution to the credit crunch.

Last Friday, the U.S. came within a hair of nationalizing a sick major bank. The government will receive up to 36% of Citigroup common shares—what financial markets would call control—for up to $25 billion in preferred stock bought in a failed October attempt to shore up the bank’s ailing capitalization.

For U.S. taxpayers, this could be a lose-lose proposition: As President Barack Obama’s newly named National Economic Council director Lawrence Summers observed last July, government sponsored enterprises (GSEs) tend to privatize profits and socialize losses. But the outcome will depend on Treasury Secretary Timothy Geithner’s next step, which he has not yet specified.

“This does something critical for the common good,” says Albert Romano, a former money center bank senior manager and trader, adding banks are but one industry affected by multiple converging crises. “We face widespread systemic risk. The overarching challenge goes beyond political views and philosophical differences.”

Sweden‘s emergency bank authority resembled the Federal Deposit Insurance Corporation, writes former Stockholm School of Economics professor Anders Aslund, a senior fellow at Peterson Institute for International Economics. “It is sheer waste to try to recapitalize a damaged bank,” as the U.S. did with Citibank and others. Like “a worm in an apple,” toxic debts left alone “will devour the whole apple.” Sweden categorized banks as obviously bankrupt, under-capitalized but salvageable, or private but in “rude health.” It reviled private-public partnerships like the “telling and repulsive” Federal National Mortgage Association (Fannie Mae) and Federal Home Loan Mortgage Corp. (Freddie Mac). Only Sweden’s bankrupt Gota Bank was nationalized and merged into the government’s own bankrupt Nordbanken, which was reconstituted as Nordea, revitalized and privatized. Private banks created private bad banks, through which they discounted or sold non-performing loans.

Already under government control, Fannie Mae and Freddie Mac remain prone to privatize gains and socialize losses. Respectively founded in 1938 and 1970 to fill mortgage lending gaps, both benefit from U.S. government debt guarantees. In the early 1980s they “fed off the carcasses of the thrift industry,” enabling troubled savings and loans “to liquidate mortgage portfolios without recognizing losses.” Later, their easy lending policies fueled the current crisis: In 2003, they together held over half America’s outstanding mortgage debt. The Bush administration last year nationalized both bankrupt agencies. Yet they remain guarantors of the American dream—making home ownership universally available—a goal the Obama administration hasn’t relinquished.

Thus the U.S. devised the new Citigroup rescue plan largely to sooth markets by creating up to $81 billion in tangible capital. Taxpayers lose out: The U.S. has collected only a quarter of $2.25 billion in annual dividends originally expected on $25 billion in preferred stock since October, although besides the control block, the U.S. would retain $27 billion in two other preferred “rescue” issues to convert into “separate trust preferred securities” paying 8% annually.

Unfortunately, markets disapprove. Citigroup shares fell 39% Friday, and further in after hours trading. Other banks were also pummeled. “The dose of intervention and its intended objectives will ultimately determine the validity of this temporary model,” says Romano. But as to whether political animus or President Obama’s social agenda will prevent an orderly resolution of the mess, the jury remains out.

Unfortunately, “mark-to-market” accounting rules, intended to forestall managers from doctoring true asset values to disadvantage shareholders, are self-defeating in the current market. Panic has virtually eliminated normal markets, slashing bank balance sheet values for some of the most troubled assets to far less than the “near expected rate” cash flows that they currently produce.

In any case, delaying puts the U.S. at risk of tumbling into something akin to Japan’s 1990s, decade-long banking crisis, Swedish economist Aslund warns. The Obama administration must “act fast” to identify, write off, and remove bad debts from normal banks—especially since assets at those banks equal at least $1 trillion, or 7 percent of America’s gross domestic product (GDP).

This entry was posted in Articles, Business and Finance, Shari'a finance. Bookmark the permalink.