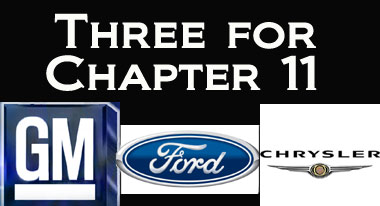 As North America headed into the 2008 Winter Solstice, economists darkly predicted that U.S. unemployment would rise from a current 6.7 percent to 8.1 percent by December 2009. On average, 54 economists surveyed expected the nation to lose more than 160,000 “non-farm” jobs monthly by then. Even economists, notorious for making inaccurate predictions, clearly saw financial conditions spinning out of control, driven by subprime mortgages, failing banks â€“ and desperate U.S. automakers.

What to do? As automakers pushed for a $14 billion bailout, the latest Congressional proposal snagged on excessive labor costs. President Bush apparently succumbed to scare tactics claiming that a single car maker “shut down” could cost up to 3.3 million jobs. Last Friday, December 12, Bush proposed redirecting some of the Treasury Department’s $700 billion financial Troubled Asset Relief Program (TARP) to General Motors, Ford and Chrysler, calling it “irresponsible” to allow them to fail.

Filing for Chapter 11 bankruptcy may be complex, even messy, but reorganizing a company is not a prescription for failure. No industry ever walked from owing $100 billion to total shutdown in one step. Rather, reorganization offers troubled companies the best possible opportunity to reshape and rejuvenate themselves. Six major airlines—including United, Delta, Northwest, and Continental—all filed for Chapter 11 and emerged with real hopes for profit. Such large and small steel companies as National Steel, Bethlehem Steel, Wheeling-Pittsburgh, Kaiser, Bayou, Weirton Steel, and many others have leveraged Chapter 11 to emerge as stand-alone companies—or to sell a leaner version of themselves to competitors.

The same is possible for Detroit: If GM, Ford, and Chrysler went belly-up, George Mason University economics chairman Don Boudreaux forecasts, jobs would not evaporate in disproportionate numbers. Bankruptcy would not cause their factories, machines, markets, worker skills, contracts for raw materials—or even consumer demand—to “disappear.” Reorganization, Bourdreaux says, is the best way to discover demand—and if it is found wanting, auto industry productivity is usable elsewhere, he notes. A bailout would only waste that productivity, pouring it inefficiently into broken companies, impeding their recovery, and saddling taxpayers with huge subsidies. There are also other side effects. Unless big, unprofitable companies seek Chapter 11, he warns, eventually all U.S. companies will stream into Washington for their “special subsidy” and “blank check.”

There are a number of advantages to a timely reorganization for the auto industry. In Chapter 11, (not Chapter 7 liquidation), GM:

* Could reorganize and negotiate with creditors to settle its debts;
* Could compete with foreign car makers, which garnered more than 30 percent of the 7.8 million retail auto sales in 2006, up from 25 percent in 1985 (the year U.S. sales peaked at 11 million); and
* Could escrow funds to back GM warranties, reassuring consumers.

There are two other significant reasons to consider a bailout:

* GM stockholders have little to lose. Shares, which traded down to $1.70 in the last 12 months, even at their $3.94 close on December 12, have lost roughly 90 percent of their value since January; and
* Reorganization money is available from surpluses within General Motors itself. GMâ€™s pension for 400,000 retirees is overfunded by $18.8 billion, and its salaried workersâ€™ plan is overfunded by $500 million. A $500 million shortfall for hourly workers could perhaps be funded by other GM pension surpluses.

Despite the advantages, General Motors Corp. CEO Richard Wagoner says he’s loathe to frighten potential buyers with a Chapter 11 filing. Yet as Chrysler’s chance of filing bankruptcy has risen, so has its market share, from 8.7 percent in July to 11.5 percent in November.

Even some auto workers are fed up enough to cry uncle. One GM line manager opposed a government bailout in his November 13 call to NPR’s OnPoint. Although edited out of the MP3 file posted online, the manager supported Chapter 11 filings. Another caller from Avon, Connecticut, quipped that auto manufacturers had raised a gun to Treasury Secretary Henry Paulson’s head and proven their poor financial management skills.

Detroit, dig in, and clean up your own mess. Taxpayers are tapped out. 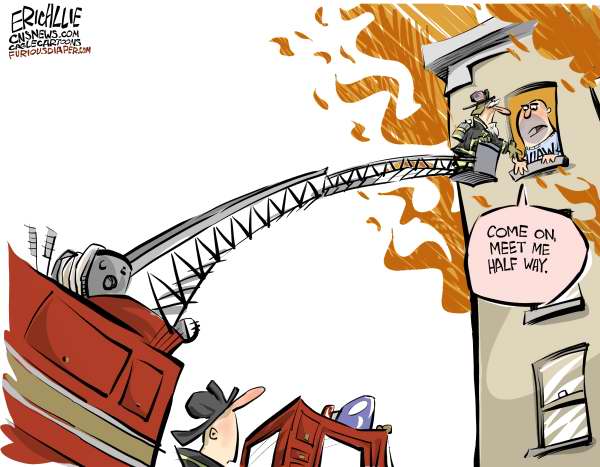 Alyssa A. Lappen is a former Senior Fellow of the American Center for Democracy, former Senior Editor of Institutional Investor, Working Woman and Corporate Finance, and former Associate Editor of Forbes. Her website is www.AlyssaaLappen.org.