Hugging Shari’a finance at the Fed 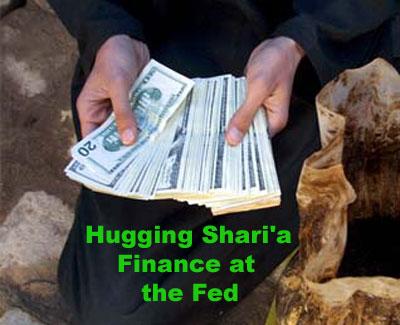 The first market day after President-elect Obama announced plans to appoint Federal Reserve Bank of New York president Timothy Geithner as Secretary of the U.S. Treasury, U.S. equities rose 6.5%. Pundits praised his experience handling crises and understanding of the troubled economy. But possibly, the market hoopla was premature, or even unwarranted. Some analysts seek his retirement.

As turmoil built, Geithner criticized Wall Street’s self-regulatory system, negative incentives and market forces, sought tighter supervision and berated insufficient “derivative securities” regulation and “credit-default” swaps allowing investors to “insure” against loses—only to fail. The Treasury Department’s former attache to the International Monetary Fund had overseen U.S. responses to the 1990s Mexican, Indonesian and Korean bailouts. But at the Fed, Geithner did not use regulatory powers to check abuses, or advocate for more regulation, impartial supervision or new laws. He even concluded that markets were improving—and after Bear Stearns’ collapse confessed, nobody “understands [the causes] yet.”

In fairness, the New York Fed began authorizing obscure shari’a banking institutions, structured shari’a issues, and opaque trading of the cottage industry’s myriad novel securities long before Geithner arrived. “Islamic bankers have been quite ingenious in developing financial transactions that suit their needs,” New York Fed first vice president Ernest T. Patrikis told an Islamic Finance conference in May 1996. “We bank supervisors, too, can be ingenious and will want to work with any of you should you decide that you want to engage in Islamic banking” in the U.S.

The dangers of Islamic finance should have been apparent. From 1996 on, all 12 Federal Reserve banks received, and were charged to enforce many Treasury Department Office of Foreign Assets Control circulars designating Islamic groups and banks as terrorist-financing institutions, organizations and individuals. In 1998, OFAC warned the Fed against transactions with Osama bin Laden and his affiliates, in 1999 froze Taliban assets, in 2002 reminded banks to check customers against known terrorist lists and in 2003 warned against trading with any unnamed counter-party.

Meanwhile, had the Fed only noticed, there were warning signs elsewhere too. In 1999, Saudi scholar Mohammad Nejatullah Siddiqi proposed at Harvard that banning interest would “cure the ills of contemporary finance,” “create a safer, saner financial world,” incorporate the “institution of waqf [Islamic trust]” in economics and create “morally inspired” behavior. In 2001, Siddiqi openly labeled shari’a finance a revolution-driver—an “universal endeavor” to replace “excesses of capitalism.”

Alarm bells should have gone off at a New York Fed event on Nov. 21, 2002, furthermore, where shari’a banking proponent Wafiq Fannoun described Islam [not only] as “Peace through submission to Allah (God),” however, “revelation-based [the Qur’an, Hadith] … complete way of life” — that is, a system of religious law proscribed by the U.S. Constitution from inclusion in secular legislation or regulatory systems. Equally at odds with Constitutional law and Western capitalism are other Islamic notions he described—namely that Allah is both creator and “owner” of all material things, and that “individuals” may not possess “natural resources important to society.” as “alternative financing for Muslims” and others recognizing individual ownership rights.

True enough, most of that happened before Geithner ran the New York Fed. But after Geithner took the helm in November 2003, the bank missed several still more critical red flags on Islamic banking.

Even hosting hosting Islamic financier Asim Ghafoor, a representative to three terror-funding organizations, on July 1, 2004 apparently gave no one inside Geithner’s Fed reason to pause from its rush to further accommodate shari’a banking.

In April 2005, New York Fed executive vice president William Rutledge admitted that the bank was “in no position to take a stance on shari’a interpretation.” He also claimed the bank would hold Islamic finance to “the same high licensing and supervision standards” as conventional banks.

Despite the New York Fed’s role as a legal supervisor of Islamic banking, neither Rutledge nor Geithner noticed, however, that shari’a banking, a 20th century “tradition” invented by the Muslim Brotherhood, can’t be severed from Islamic law—statutes that Mohammed initiated, which caliphs, scholars and jurists developed over the last 1,400 years. They hold that shari’a grants Muslims (the ummah) supremacy over all others—along with all land and property to hold in trust for Allah. Thus as Fannoun effectively told the Fed in Nov. 2002, land or property, once conquered or acquired by Muslims (or for Allah), can’t generally revert to their original owners. Shari’a commands Muslims to wage jihad warfare until they subdue all “infidels” under universal Muslim rule, as Ibn Khaldun avowed in the Muqaddimah (trans., Franz Rosenthal, Princeton Univ. Press, 9th printing, 1989, p. 183).

Confiscating possessions from non-believers exacts “revenge,” wrote jurist Abul Hasan al Mawardi (d. 1058). Qur’an 57:2 argued, “To Him belongs all dominions of the heavens and earth.” Qur’an 59:7 echoed, “That which Allah giveth as spoil [war booty] unto his Messenger…,” Allah authorized 2nd Islamic Caliph, Umar Ibn Khattab, to confiscate property by force, fulfilling an Islamic trust, or ruling under Allah’s law. It was thereby just to take anything from nonbelievers, (The Laws of Islamic Governance, Taha Publishing, 1996, pp. 207-251) including all territories Islam ever controlled.

Apparently, Fed officials also neglected to investigate the alliances and beliefs of shari’a advisors and their affiliates in the Accounting and Auditing Organization for Islamic Financial Institutions (AAOIFI) and Islamic Financial Services Board (IFSB) standards agencies.

Former Malaysian Prime Minister Mohamed Mahathir in 2002 christened IFSB “a universal Islamic banking system” and “a jihad worth pursuing….” Its board members include the terror-funding Iranian, Sudanese and Syrian central banks and Palestinian Monetary Authority.

Perhaps Treasury Secretary-designate Geithner seriously meant to keep Rutledge’s promise to grant Islamic financiers no special favors. But allowing shari’a finance to exist at all is itself a special favor.

Only three days earlier Citigroup uber-shareolder Prince Alwaleed bin Talal, a godfather of Islamic finance, had announced plans to up his stake in America’s largest (failing and “underpriced”) bank from 4% to 5%. On March 20, 2006, the Saudi Kingdom Holding Co. CEO was “honored for humanitarian contribution to Islam” at a “glittering gala to celebrate excellence in Islamic Finance” that also featured terror-financier and Dallah al-Baraka founder and president Saleh Abdullah Kamel.

3 responses to “Hugging Shari’a finance at the Fed”