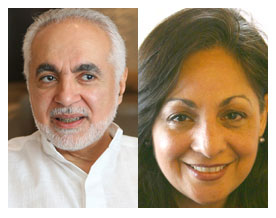 Imam Feisal Abdul Rauf and his wife Daisy Khan pretend they’re “moderate Muslims.” Yet another crack has appeared in their crumbling facade, however. The New York City office of their American Society for Muslim Advancement (ASMA), at 475 Riverside Drive, has for many years sat in the very building, on the very floor, immediately adjacent to the suite housing the New York City chapter office of the Council of American-Islamic Relations (CAIR), the U.S. representative of Hamas. 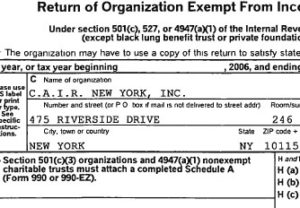 In 2007, the U.S. Department of Justice declared CAIR an unindicted co-conspirator in the Holy Land Foundation terror-funding case. In October 2008, the FBI’s Oklahoma office canceled plans to appear at a Muslim “outreach” event due to CAIR’s participation. In Jan. 2009, FBI offices nationwide were reported to have also severed ties with CAIR. In a Feb. 2009 letter to U.S. Rep. Sue Myrick (R-NC), the FBI confirmed the reports.

Meanwhile on Nov. 24, 2008, HLF and five of its officers were convicted of materially supporting the designated foreign terrorist group, Hamas. Federal prosecutors successfully opposed a petition by CAIR, the Islamic Association of North America (ISNA) and the North American Islamic Trust (NAIT) to expunge their names from the list of alleged HLF coconspirators. A federal judge denied their motion in 2009. Thus CAIR, ISNA and NAIT remain unindicted terror-funding coconspirators.

By itself, sitting on the same floor, in the next suite to CAIR might not establish ASMA’s tight connections to CAIR or the Saudi-based Organization of the Islamic Conference (OIC), built on Muslim Brotherhood principles. But sharing office buildings, floors and suites is common amongst Islamic terror-funding and supporting organizations. In the most famous example, in the May 2002 federal raid on the Herndon,Va. Safa companies and SAAR Foundation offices at 555 Grove Street, U.S. Treasury Department Operation Green Quest found over a dozen interlinked terror-funding Muslim charities and companies, all subsequently shuttered. They carted off truckloads of evidence. [1]

Rauf hosts other hotshot MB leaders in his MLT subsidiary too, including Dhaba “Debbie” Almontasser, who like Ali worked with the NY chapter of CAIR, Hamas’ U.S. arm, to counter-attack the New York City Police Department. She organized an online discussion group to obtain “input” for CAIR’s “Community Statement.”

Several U.S. MLT appointees list no surnames or qualifications whatever. Yet another red flag.

New Yorkers and Americans who consider Rauf a not-so-secret radical are not alone. The devout Bengali Muslim dissident Salah Uddin Shoaib Choudhury agrees that efforts to build a giant mosque opposite Ground Zero are an abomination. Its construction will only delight jihadists, whom he wants to disappoint. His Weekly Blitz newspaper has published many objections to Rauf’s plan, not least of all since New Yorkers are overwhelmingly opposed, considering it as insensitive, say, as “the German government opening … a Nazi appreciation museum right outside the Auschwitz death camp.”

Choudhury has faced such fights before. Bangladesh authorities imprisoned him many times for his pro-American and pro-Israel sentiments and he still faces trial. Lately, a senior Bangladeshi intelligence official has called him repeatedly threatening “consequences if we continued to publish such [“extremely provocative anti-Islamic”] articles.” His newspaper’s required government registration could be revoked. The official merely seeks to appease “Saudis and other anti-American elements,” however, and perhaps even to renew “previous secret affiliations with jihadist groups like Hizb-ut-Tahrir.”

Choudhury will not rest, however. No one else should either.

Choudhury evidently perpetrated multiple subterfuges in the decade since 9/11. Since at least 2010, for example, the North Korean government compensated him grandly to publish dozens of “propaganda pieces in his Weekly Blitz newspaper, for dictator Kim Jung il’s House of Horrors,” according to Brenda West’s superb investigative piece today at Family Security Matters.(The above piece also initially ran at FSM, where I am a Contributing Editor.)

Previously, Choudhury had created from whole cloth several fictitious guises, under whose cover he had for years likewise supported North Korea, until dogged Bengali bloggers exposed those frauds.

Regarding Rauf, Choudhury’s observations happen to be truthful and accurate. However, that hardly dignifies this source, who has so often and so effectively duped many Western leaders and journalists, I am sorry to say, including myself. In fact, he has done great harm here too, which may after all have been his intent. For Choudhury’s position in this case provides a glaring example of the proverbial pot calling the kettle black.

Kindly read Brenda West’s impeccable report on Choudhury. I was unaware of his malevolence when writing the above piece, but a deluge of seemingly irrefutable evidence has now been presented.

Therefore, I herewith withdraw any previous statements of support I gave on Chourdhury’s behalf while he purported to be an oppressed journalist and encourage my colleagues and political leaders to do the same. Further, I commit not to cite Choudhury again.