The High Cost of Recovery

Posted on January 27, 2009 | Comments Off on The High Cost of Recovery

Can America really spend its way out of recession? 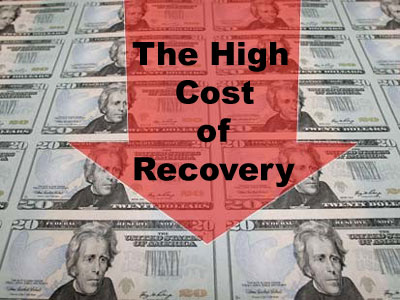 In the first sweep of his Presidential pen, President Barack H. Obama proclaimed Jan. 20 a “National Day of Renewal and Reconciliation” to hearten Americans in a “season of trial” and discord. Obama asked citizens to shoulder the “glorious burden” of U.S. democracy with service to a “common purpose,” that is, “remaking this Nation for our new century.” (And that, ironically, the same day Rev. Joseph Lowery insulted all Americans by implying that heretofore whites always embraced what is wrong.)

Renewal sounds great in theory. But Obama apparently proposes to remake the U.S. economy into the “fixer-upper” bought by two hopeful newlyweds in the popular 1986 comedy, The Money Pit. They poured their love and life’s savings into the house. In the end, the structure literally crashed down around them, and their marriage nearly went with it. Obama may now be on his honeymoon with most U.S. voters. But such a remake, America doesn’t need.

Trouble is, Obama’s renewal thesis erroneously hinges on $825 billion more in government aid—euphemistically labeled the American Recovery and Reinvestment Act (ARRA). If it passes, that would be $550 billion in new spending and $275 billion extra tax relief—more than most U.S. government spending sprees in history, and some 3% of gross domestic product (GDP) through 2010. Proposed January 16 in the House, that spending would top upwards of $2.7 trillion exhausted in 2008, not counting $167 billion in emergency tax rebates—and at least $7 trillion allocated to “economic rescue.”

The ARRA plan includes some great ideas. For example, it proposes $32 billion in support for a “smart electrical grid” to vastly improve energy efficiency, as initiated in Europe in 2005, mandated by the 2007 Energy Independence and Security Act, and detailed by President Bush’s Department of Energy. Also potentially valuable are $20 billion in renewable energy tax cuts and credits and $6 billion to weatherize modest income homes.

But most of Obama’s ARRA proposals amount to run-of-the-mill programs, conveniently lumped under the “economic renewal” label for political expediency. The bill allocates $32 billion to transportation projects, $31 billion for government building and public infrastructure repair, $19 billion to water projects and $10 billion for railways. It proposes $79 billion for state-level fiscal relief to prevent educational aid cuts, $41 billion for local school districts, $21 billion to modernize schools and $16 billion for science and rural internet facilities.

Conceivably, at least, those funds could be well used. But legislators traditionally squabble over federal aid, which is also bridled with red tape, terribly inefficient—and usually lined with pork.

Obama well understands how and why to serve legislative pork. Chicago schools, for example, did not fare well during his Illinois State and U.S. Senate tenures. In 2005, teachers in suburban Chicago’s Thornton Township earned an average of $83,000 for nine months of five-hour and forty-five minute school days. By Obama’s account, Thornton’s children wanted longer school days. But his Chicago Teachers Union supporters rejected that. Thus Chicago spent $10,500 per student in 2008, 15% over the 2006 national average. But last year only 34% of Chicago students met or exceeded reading standards on the Prairie State Achievement Exam (PSAE), and 28%, its math standards. Sure, scores on Chicago’s Illinois Standards Achievement Tests (ISAT) appeared improved from 2005 to 2008. Yet only 55% of Chicago students graduated in 2007.

Also masquerading under Obama’s economic renewal act is $154 billion for health care—$90 billion to bolster state Medicaid funds, $39 billion in health insurance subsidies for the officially unemployed, $20 billion for health-information technology modernization, and $4 billion for preventive care. Improving health-information technology might fall under economic renewal. But what do $134 billion in health care subsidies have to do with it? Perhaps they’re meant to jump-start Obama’s controversial nationalized health care plans even before Congress discusses the subject.

As for $275 billion in proposed tax relief, how do $140 billion in personal tax cuts for two years ($500 per worker and $1,000 per couple) differ from the Bush Administration’s ineffective 2008 emergency relief program? Most of the rest would cover more subsidies: $1,000-per-child tax credits for the working poor, expanded earned income credits for families with three kids, $2,500 college tuition credits, and permanent forgiveness on repayment of $7,500 tax credits for first-time home buyers. The only real economic stimuli, two of which duplicate one other, are tax credits on past profits for currently unprofitable businesses, “bonus” depreciation for new plant and equipment purchases, doubling small business capital investment and new equipment write-offs, and tax credits for companies hiring “disconnected youth and veterans.”

Obama’s economic team, including Treasury Secretary-designate Tim Geitner, posits that all this spending will magically stabilize things and “create or save” nearly 4 million new jobs by 2010. On Jan. 21, Geitner reiterated that to the U.S. Senate Finance Committee, arguing that the Congressional Budget Office (CBO) had miscalculated its projection that the U.S. cumulative budget deficit would reach nearly $2 trillion by 2013, since the office had not factored in Obama’s proposals. The full Senate approved Geithner’s nomination Jan. 26, by 60 to 34.

Mind you, the CBO is neither authorized nor mandated to base economic projections on draft proposals of presidents-elect. Moreover, the CBO projected budget issues for the next ten years on Jan. 8, over a week before House Democrats introduced the ARRA. And ARRA would pump most of the total into government programs, not directly into the economy.

Yet Geitner insisted, had the CBO only factored in such Obama provisions “as the bonus depreciation and fiscal aid to the states” and less traditional accounting “assumptions of the spend-out rates,” it would have concluded that the proposed bill would “ensure the fast-acting spend-out rates that would be needed fiscal stimulus [sic] over the next few years.” He neglected to note that the Federal Reserve Board can’t provide further economic rocket fuel by slashing the “federal funds rate” charged on overnight interbank loans. That barrel is dry.

Unfortunately, the Committee voted, 18 to 5 (based on Geithner’s unpaid past taxes, Grassley opposed), to send the nomination to the full Senate, which like the Senate Finance Committee ignored Grassley’s point. So much for bi-partisanship.

They should: In three months, the U.S. Fed doubled the monetary base—total bank reserves plus U.S. currency—to no avail. The Fed wasted all this money creating a “liquidity trap.” No one is borrowing.

Notably, printing money has failed abysmally worldwide. The U.K. expended nearly £500 billion to “restore confidence in Britain’s major lenders,” bolster bank shares and guarantee loans. British investors gained zero confidence. Rather, the British pound hit a 23-year low on Jan. 21, after the Bank of England announced it would increase the money supply to keep inflation over 2.0%. Likewise, Swiss Economic Minister Doris Leuthard last October injected bailout funds into UBS and Credit Suisse, mainstays of an industry supplying 11.4% to her country’s GDP. But UBS wrote off $550 billion of its asset value to cut balance sheet leverage to 3%.

The short-term failures of money-printing are everywhere visible. The “European Central Bank, the Bank of England and the central banks of India, China, Australia, Norway, Sweden South Korea, the Czech Republic, Switzerland, Japan and even Indonesia” all aggressively eased monetary policy to buoy faltering economies, notes famed economist A. Gary Shilling,—who like myself predicts deflation—not inflation. Nothing worked. Now “central bank rates are approaching zero at which point, … they’ll stop falling,” he jests darkly. In Asia, Sinagpore predicts economic contraction of 2% to 5% this year, following an annualized decline of nearly 17% in its domestic product from October through December.

Long term, even Obama’s stridently Keynesian team members realize that printing money is no cure all. Brookings Institution economist Jason Furman wrote last year that government tax and spending stimuli should be short-lived and “not increase the already large long-run budget deficit,” lest they also increase inflation and tighten the money supply.

Despite his bluffs at the Senate Finance Committee, Obama economic point man Tim Geithner knows the projected $1.2 trillion 2009 U.S. budget deficit, and $412 billion 2008 interest bill—above 9% of the U.S. budget—are serious causes for concern. He also knows that interest bills will only rise with increased spending, not least since interest rates themselves have nowhere to go but up.

The U.S. national debt, now $10.6 trillion, equals $34,868 for each of 304 million U.S. citizens. But Americans filed only 143 million tax returns for 2007, a number likely to fall sharply as unemployment rises. Every dollar the U.S. government spends must be paid back some time. Taxpayers will inevitably shoulder the gargantuan, ill-conceived burden.

Do Americans really want change that remakes the U.S. into a national Money Pit?