In this stunning investigation, the Ground Zero Mosque Imam’s links to Malaysia are traced. Are his plans based upon Malaysian Islamist and Muslim Brotherhood strategies of conquest? 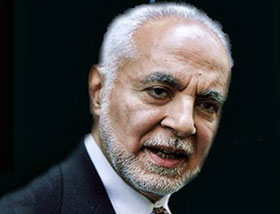 All roads taken by Feisal Abdul Rauf seem to lead to the sharia state of Malaysia.

It now seems that Malaysian Islamic ideology also played a big role in formulating the Muslim Brotherhood strategy to destroy the West from within and sabotage “its miserable house.”4

Those words, of course, paraphrase Article 4 of “An Explanatory Memorandum on the General Strategic Goal for the Group in North America,” penned by Mohamed Akram and secretly circulated to trusted Muslim Brothers on May 22, 1991.5

Also entitled “Understanding the role of the Muslim Brother in North America,” Article 4 needs no further comment. In its entirety, it succinctly and frighteningly explains,

“The process of settlement is a “Civilization-Jihadist Process” with all the word means. The Ikhwan must understand that their work in America is a kind of grand Jihad in eliminating and destroying the Western civilization from within and “sabotaging” its miserable house by their [own] hands and the hands of the believers so that it is eliminated and God’s religion is made victorious over all other religions. Without this level of understanding, we are not up to this challenge and have not prepared ourselves for Jihad yet. It is a Muslim’s destiny to perform Jihad and work wherever he is and wherever he lands until the final hour comes, and there is no escape from that destiny except for those who chose to slack. But, would the slackers and the Mujahedeen be equal.” 6

Recognizing the centrality of Article 17, however, takes on critical importance in light of national and increasingly international furor over Feisal Abdul Rauf ‘s plan to construct a towering 15-story mosque at Ground Zero. Entitled “Understanding the role and the nature of work of The Islamic Center’ in every city with what achieves the goal of the process of settlement,” Article 17 states,

“The center we seek is the one which constitutes the “axis” of our Movement, the “perimeter” of the circle of our work, our “balance center”, the “base” for our rise and our “Dar al-Arqam” to educate us, prepare us and supply our battalions in addition to being the “niche” of our prayers. (emphasis added)

Like Rauf, reports the Oxford Dictionary of Islam, Dar-al-Arqam is rooted in Malaysia. Actually, Feisal Abdul Rauf could easily have drawn from the prototype “grassroots Malaysian Islamic dawah [proselytization] movement” that Ashari Muhammad al-Tamimi founded in 1968, and evidently named for the first Islamic school of Muhammad, to

“revive Islamic religious belief and values for comprehensive practice in everyday life. Emphasizes self-assessment, self-correction, and formation of the Islamic personality. Uses the Sufi teacher-disciple bond to reinforce obedience to leadership. Sponsors lectures, concerts, and cultural shows, publishes books, magazines, and newspapers, and produces videos and cassette tapes showing the Islamic way of life. Expanded to an international arena in 1979 through missionary programs and diplomatic contacts. Has established self-contained Islamic villages throughout Malaysia to demonstrate the viability of the Islamic sociopolitical and economic system. Operates schools, clinics, businesses, agricultural complexes, and advertising and service agencies.” 7

Rauf expressed almost identical wishes in his 2000 book, Islam a Sacred Law: What Every Muslim should Know about Shariah. 8 In it, as in his later, 2004 book, Rauf pines for pure, orthodox Islam and the inspiration for both violent and non-violent jihad, as preached by a bevy of Islamic clerics throughout the ages — such as 14th century jurist Taqi al-Din Ahmad Ibn Taymiyya (d. 1328) and his 18th century follower Muhammad b. Abdul al-Wahhab (d. 1793). Rauf seeks to “rejuvenate” their Islamic religious spirit, and that of some he falsely labels “modernists,” Jamal al-Dinal-Afghani (d. 1897), Muhammad Abduh (d. 1905), and Abduh’s biographer Rashid Rida (d. 1935). Far from modern, however, they all sought to impose sharia law more widely — despite its requirements for permanent jihad war, and discrimination and dehumanization of non-Muslims and women. So did classical Sufi master al-Ghazali (d. 1111) — another orthodox Muslim, an equally bellicose jurist concerning annual jihad campaigns, discriminating against non-Muslims and imposing Islamic law. 9

And yes, Rauf plans a mosque: His American Society for Muslim Advancement (ASMA) registered with the Internal Revenue Service in 1997 as a “church” — only to avoid the annual 990 tax form required of all other U.S. tax-exempt non-profit organizations. But it is not a church as Westerners understand that word. It is a battalion.

Article 17 of the MB strategy for North America proves there is nothing innocent about an “Islamic cultural center,” whether labeled “mosque” or not. It clearly invokes the need for military and politically supremacist strategies.

This is in order for the Islamic center to turn – in action not in words – into a seed “for a small Islamic society” which is a reflection and a mirror to our central organizations. The center ought to turn into a “beehive” which produces sweet honey. Thus, the Islamic center would turn into a place for study, family, battalion, course, seminar, visit, sport, school, social club, women gathering, kindergarten for male and female youngsters, the office of the domestic political resolution, and the center for distributing our newspapers, magazines, books and our audio and visual tapes.

In brief we say: we would like for the Islamic center to become “The House of Dawa”‘ and “the general center” in deeds first before name. As much as we own and direct these centers at the continent level, we can say we are marching successfully towards the settlement of Dawa’ in this country.

Meaning that the “center’s” role should be the same as the “mosque’s” role during the time of God’s prophet, … when he marched to “settle” the Dawa’ in its first generation in Madina. from the mosque, he drew the Islamic life and provided to the world the most magnificent and fabulous civilization humanity knew.

This mandates that, eventually, the region, the branch and the Usra turn into “operations rooms” for planning, direction, monitoring and leadership for the Islamic center in order to be a role model to be followed. (emphasis added).10

Whatever he wishes to name his planned Islamic center at Ground Zero — Cordoba House or Park 51, Islamic cultural center or mosque — Muslim Brother Feisal Abdul Rauf clearly follows the 1991 Muslim Brotherhood strategic mandate for North American, which his father followed in 1965 — decades before it was even set to paper. Rauf senior secretly bought two thirds of a prime 3rd Avenue Manhattan block for a personal Islamic “trust” with $1.3 million in funding from Kuwait, Saudi Arabia and Libya. 11 Likewise, only when the E. 96th St. Islamic Cultural Center of New York opened in 1992 did Rauf le père reveal that $17 million in construction funding emanated from Malaysia and 45 other Organization of Islamic Conference (OIC) nations. 12 By 2010, the enormous upper 3rd Ave. Islamic complex had added another two buildings. Since 1984, its founders envisioned apartment units restricted to Muslims alone. 13

The Muslim Brotherhood clearly spelled it out in Article 17. Building Islamic centers equals building military “battalions,” points from which to later stage the planned destruction of the West.