Posted on October 8, 2010 | Comments Off on Organization of Islamic Conference’s Chicago Summit Flops

The recent Chicago meeting of the Organization of the Islamic Conference (OIC) had low turnout, U.S. envoy Rashad Hussain failed to turn up, and only a tenth of the audience seats were filled.

by Alyssa A. Lappen 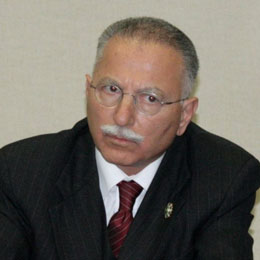 Ekmeleddin Ihsanoglu of Turkey presented a moderate and modern portrait at Chicago’s late September American Islamic College (AIC) conference. He tried. The “second largest intergovernmental organization outside the United Nations” stands as a “strategic and crucial partner” to the U.N., Ihsangolu said and is “not a religious organization.” Sounding liberal was paramount. After all, Ihsangolu appeared here, the first time any OIC forum welcomed the U.S. general public.

The OIC, he said, had evolved into a

“unique institution with a very modern and up-to-date charter and a 10-year program of action propelled by the vision of moderation and modernization…. [that] voices the consensual views and attitudes of the Muslim world, defends its causes and coordinates … joint actions … political, economic, cultural or otherwise. [emphasis added]

“[It] reflects the true and real image of Islam, based on tolerance, peace, … and acknowledgment of diversity [to] dialogue with other[s] … [for] historic reconciliation between the Muslim world and the West. Contrary to the popular understanding, … [the Abrahamic tradition of faith,] Islam and points of reference is (sic) compatible with the finest manners of human nature. It … embraces the supreme virtues of peace, equality, justice, compassion, human rights. It respects nature and the environment…, not the preserve of any people, or religion or civilization…, [but] diversive (sic) values… all [must] internalize and uphold.”

OIC ambassador to the U.N. Ufuk Goken noted its condemnations of attacks on an active duty Jewish soldier in Israel and Christians in Mosul. The OIC also combats “Christianophobia,” he said, and is not:

Former White House special OIC envoy Sada Cumber even faulted Islamic theocracies and seemed to criticize the OIC for failing to unify Islamic sects. The world’s real WMD, Cumber said, are “Weapons of Muslim Destruction” — Muslim governments “pushing their version of Islam” on the world. Not a single Muslim government anywhere offers its citizens the life, liberty, and pursuit of happiness Muslims enjoy in the U.S., he said. “The day [my native] Pakistan can offer that, I will move there.”

“in contrast to to the European states “[OIC nations unify] to [defend] their national sovereignty and territorial integrity… support … Palestine with al-Quds Al Sharif, the Arabized name for Jerusalem, as its capital, and exhort each other to promote human rights, basic freedoms, the state of law (shari’a), and democracy according to their constitutional and legal system — in other words, compliance with shari’a.”

Sure enough, Ihsangolu stressed Muslim efforts to open “channels of communications with their host countries,” suggesting Muslims aren’t citizens of “their host counties,” but the Muslim ummah (nation). The Brotherhood espouses this foundational Islamic dogma, notably in its May 1991 strategic goals for North America by Mohamed Akram.1 Ihsangolu often cited the dread “Islamophobia,” thus embracing immutable sharia requirements that Muslims may deride other faiths, but must never tolerate critics or criticism of Islam, in any form. Like most other speakers, he also encouraged Muslims, “Join other groups in fighting injustice,” which “goes hand in hand” with Islamic teachings. By what definitions.

“Islam in the American context,” the 3rd panel, featured Gallup Center for Muslim Studies’ Magali Rheault. She outlined findings of a 2010 “religious perceptions” poll purported to show anti-Muslim bias, Muslim depression, unhappiness and poor economic status relative to other U.S. religious groups. But Gallup failed to ask why any disliked specific doctrines. If it confirmed participants as U.S. citizens, the report doesn’t say. Glaringly absent were queries on U.S. allegiance, or if participants:

While subject to U.S. laws, Muslim disregard for them did not concern two other 3rd panel speakers. Chicago Malcom X College social scientist Misbahudeen Ahmed-Rufai, a Ghana native, discussed largely silent African Muslims in the U.S. He cited, but did not question, the huge percentages of African Muslims who arrived or remain in the U.S. illegally.

“If you burn a Koran it is a hate crime,â€ asserted Loyola Univ. Islamic studies director Marcia Hermansen. She thereby ignored the outrageous May 2009 U.S. military incineration of Bibles sent unsolicited to U.S. troops in Afghanistan — and more importantly, the First Amendment that consciously and actively lets citizens speak freely — and burn U.S. flags, Bibles or Korans if they like.

Perhaps most revealing were some comments during the day’s 4th and final “Imagining our future” panel. Gambling State Univ. mathematical professor Abdulalim Shabbaz claimed that Europeans invented racism — he specified it as “white supremacism” — to justify enslaving Africans. He ignored the ongoing Islamic slaving tradition. And Shabbaz first quoted Koran 49:13, acknowledging human diversity, while enjoining Muslims to assert their “most honored” status, another kind of supremacism:

“O mankind! We created you from a single (pair) of a male and a female, and made you into nations and tribes, that ye may know each other (not that ye may despise (each other). Verily the most honoured of you in the sight of God is (he who is) the most righteous of you. And God has full knowledge and is well acquainted (with all things).” [emphasis added]

Convert S. (“Sherman”) Abd al-Hakim Jackson, a speaker at the Muslim Brotherhood Islamic Society of North America (ISNA), American Learning Institute for Muslims (ALIM), and Muslim Alliance of North America (MANA) seemed to envision a Muslim revolution. He worried that U.S. Muslims try too hard to prove what they are not — “intolerant,” “terrorists,” or “trying to impose our way of life.” He feared a “domesticated” U.S. Islam not making “principled” social contributions. He wanted Muslims to be “America’s moral conscience,” challenging the U.S. “state” and “dominant culture” and teaching Americans they’re “not infallible.” That would require more power. He cited the grandson of MB founder Hasan al-Banna, Tariq Ramadan: those impious at night can’t “expect to change society by day.” U.S. Muslims should use their “perceived threat,” or risk losing relevance, he said. Minority medieval Muslims had conquered the mid east and made unIslamic institutions Islamic. Hint hint.

Convert Aminah McCloud, a self-described early acolyte of Muslim Brotherhood International Institute of Islamic Thought (IIIT) founder Ismail Faruqi, offered the biggest shockers. Introduced by MB mainstay ISNA secretary general Safaa Zarzour as his mentor, teacher and friend, McCloud said Muslim leaders “represent us as a passive people, a patient and docent (sic) in the face of oppression.” That insures U.S. Muslims will “have no future,” she said. She questions Muslim involvement in the 1993 World Trade Center attack.

“We [Muslims] did not perform our own investigations. We took the side of those against us and declared that any [groups] involved were not of us, praying that we would not be called on to do anything more than acquiesce…”

Regarding Muslim responses to the genocidal 9/11 attacks, she said,

“the thing that alarmed me the most was when I watched Muslims who were supposed to represent me claim that Islam just meant peace. I would have never transitioned to a religious tradition that just meant peace, that stood for nothing.”

“…America is a nation of cowboys, with little respect for those who don’t fight for what they believe in. …America, for better or worse, again, is a nation of cowboys. From the stories of its first genocide against the people of this land, everyone knows what Americans are liable to do if you extend an unprotected hand.”

Ihsanogulu wanted to sway novices to Islam with a ceremonial facade identical to that of an Oct. 2009 Helsinki “Islam in Europe” conference. “We are not anti-Christian, we are not anti-Semitic, we are not anti-anybody,” he said then. The “moderate and modern” 2008 OIC renaissance (strangely labeled “jihad of peace“) claimed all the same purportedly liberal values Ihsangolu paraded in Chicago.

The Saudi-founded and petrodollar-flush OIC spent a fair sum to that end. It presumably underwrote air tickets and rooms for key OIC and Muslim leaders and funded dinner and soft drinks for maybe 75 guests on Sept. 28, to welcome Ihsanoglu and celebrate the opening of AIC, albeit as-yet unaccredited. On Sept. 29, the OIC plied another 75 or so Muslim leaders and guests from the general public with coffee, tea, and a four course sit down luncheon of hummus and pita; salad; halal chicken, vegetables, potatoes; and rice pudding. Hosts distributed party favors too — dated, embossed OIC brief cases holding patented, OIC coffee mugs, OIC stainless travel mugs and retractable ball-point pens.

Nevertheless, Americans should remain vigilant. Constitutional protections of free speech and religious practice do not outlaw criticism of faith that would infringe on the rights of others. The OIC-hosted Muslim speakers often invoked U.S. Constitutional rights, but conveniently ignored them in cases that others had bruised their sentiments. They labeled all critics of Islam hate mongers and bigots.

Americans should recognize this strategy as a dangerous attempt to introduce a key sharia law component — prohibiting any criticism of Islam — to the detriment of everyone, especially Muslims. To achieve true renaissance presuppose questions.

Notes:
1 Mohamed Akram, “An Explanatory Memorandum on the General Strategic Goal for the Group in North America, 5/22/1991,” www.nefafoundation.org/miscellaneous/HLF/Akram_GeneralStrategicGoal.pd f (viewed 9/18/2007); “Attachment A,” In the U.S. District Court for the Northern District of Texas Dallas Division, USA vs. Holy Land Foundation for Relief and Development, http://www.pipelinenews.org/images/2007-05-29-US v HLF-ListCoConspirators.pdf (first viewed 6/1/2007).