In which a Congressional investigation is warranted. 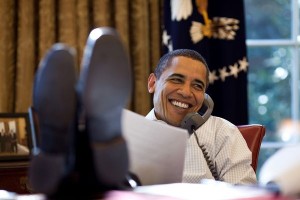 To many, that statement also confirmed the naïve fantasy world Obama instituted in the White House. In contrast, clear-sighted congressmen, statesmen, Egyptian liberals and activists, Islamic history scholars and more than a few journalists realized from day one that the January 2011, Tahrir Square demonstrations would end with MB achievement of their 84-year dream — to reinstate sharia in Egypt — and that after gobbling the presidency they deceitfully claimed not to seek, the MB would launch an open phase in their perennial effort to impose universal Islamic law through a new global caliphate.

Obama’s Sunday call, in reality, may have confirmed something far worse — his full devotion to revolution, in the classical sense — i.e. full-blown popular overthrow of government. The president long followed guiding socialist “lights,” like the late Saul Alinksy, and his childhood mentor and hardened communist Frank Marshall Davis, whom some now claim was Obama’s “real father.”

Has Obama now confessed — or come as close as he will ever — that his true sympathies lie both with full-blown revolution, and the Muslim Brotherhood and Islamic supremacists, not with U.S. interests at all?

Perhaps. Given Obama administration efforts to squelch all investigations and prosecutions of Islamic radicals in the U.S., one must wonder.

In spring and summer 2010, I inquired officially under the Freedom of Information Act regarding governmental agency connections to the North American Muslim Brotherhood. I approached most major government arms, including all U.S. Treasury Department units, the Justice Department, Homeland Security, State Department, and Federal Reserve Board. In every instance, I reviewed specific agency requirements for FOIA requests and submitted queries accordingly.

Not one inquiry produced results, although plenty was to be had, even excluding items concerning national security. Most agencies claimed they had conducted the stipulated searches and could find no data. A few FOIA officers admitted they would withhold the requested data, and included with their responses instructions on how to appeal. I understood that only an army of attorneys could break the wall of silence.

The FBI reply, in particular, one could most politely describe as an extreme non sequitur. I had specifically requested “existing documents” on FBI meetings from 1/1/2007 through July 2010 with specific North American MB organizations and individuals, all of whom I named. The U.S. Department of Justice had previously specified most of these groups, moreover, as part of the Muslim Brotherhood, as had the latter’s internal North American Muslim Brotherhood documents.

I had further specified what I meant by “existing documents.”

I requested data (for example) on FBI meetings with the Islamic Society of North America and its subsidiaries, whose North American Islamic Trust unit was named as an unindicted co-conspirator of the convicted Holy Land Foundation, along with the Council on American-Islamic Affairs. Chicago’s U.S. 7th Circuit Court of Appeals had in a Dec. 2008 ruling, similarly stated that the American Muslim Society, whose FBI meeting data I also sought, was indistinguishable from the Muslim Brotherhood. Almost none of the groups denied having Muslim Brotherhood origins, MB members among their co-founders, and high regard for both the MB and its father, Hassan al-Banna. There should have been no confusion, as I carefully met FBI guidelines for FOIA requests and specifically asked for only “non-classified” data.

Nevertheless, the reply from an FBI section chief disconnected entirely from the reality, as my FOIA had requested nothing even remotely resembling what he claimed.

Given subsequent news, I concluded that the insulting and infuriating FBI non-response was intentionally so, as was the FBI’s failure to respond to my politic follow-up inquiry.

In March 2010, the U.S. Department of Justice had dropped indictments against the Council of American-Islamic Relations, the American Hamas fundraising front planned at a 1993 Philadelphia meeting of Hamas officials with CAIR co-founder Omar Ahmad and current CAIR executive director Nihad Awad, according to an explosive April 2011 Pajamas Media report by my colleague, investigative journalist Patrick Poole. (Shortly thereafter, I learned that the DOJ had rebuffed other FOIA requests on the North American Muslim Brotherhood that had followed mine.)

The Justice Department, in short, had more than enough evidence to indict CAIR, co-founder Omar Ahmad and Nihad Awad. Instead, a March 31, 2010 memo, “Declination of Prosecution of Omar Ahmad,” from Assistant Attorney General David Kris to Acting Deputy Attorney General Gary Grindler, determined to drop the case, according to two DOJ sources with whom Poole spoke.

Rep. Gohmert blasted Attorney Gen. Eric Holder for giving a pass to these MB officers and groups, despite a “mountain of evidence” and warned that “at least one” would-be-suspect-but-for-Obama has crowed of its work at DOJ to “advise on the purge of counter-terrorism training materials.” Meanwhile, his committee has been waiting a year for undisclosed HLF documents locked up by DOJ. Gohmert confronted Holder on Thursday, June 21, as reported here Monday.

Besides all that, in 2010 Obama’s FBI added Muslim “outreach” partners to include yet more Muslim Brotherhood figures, such as the Muslim Advocates, Muslim Public Affairs Council and All Dulles Area Muslim Society (ADAM). All of them, as well as other recent FBI Islamic “outreach” additions, are recognized MB groups. Interestingly, the Muslim Advocates in 2009 sued the FBI in federal court for mosque surveillance [a case they lost in Jan. 2012]. The FBI apparently rewarded them by letting MB organizations define the terms American law enforcement and military branches can use to discuss Muslims, even those who seek to defeat the West. Indeed, the very word “jihad” — which the Koran mentions 164 times, generally in terms of warfare or other means of conquest — has been banned.

In stark contrast, the latter had vowed to protect Egyptians from Islamic forces wishing to drag them back to “the dark ages” — and halt the tidal wave of crime since Mubarak’s ouster. Naturally, Shafiq attracted much heavier election support than “analysts” had predicted, especially from Egypt’s justly terrified Coptic Christian minority. So on June 25 (surprise, surprise), MB minions charged Shafiq for graft during his 2002 through 2011 term as aviation minister. On June 26, Shafiq flew to Abu Dhabi. Speculation that Shafiq actually “fled” has virtually ignored the MB retribution he could expect.

Unlike the MB case against Shafiq, a recent civil lawsuit challenging MB interests is much likelier to dead-end and endanger complainant Mohamed Moussa than to address his charges that Presidential Election Commission monitors favored Mursi, while the PEC also turned a blind eye to MB distribution of oil and sugar to buy Mursi votes before the June 16 and 17th runoff.

So let’s ask again, and again, why does Obama champion the MB both at home and abroad? And when will Congress investigate?